5mk viking ship, grey paper, single franking, foreign postcard rate. Postcard sent from Narva to war prisoner camp in Frankfurt. Likely wife Lida is searching for his husband Ivan Gusarov, tells that he has written 10 times but no reply, asks when he comes back home. Writes that she waits for him already for 3 years. However, front side has German text that if someone knows that person, please pass on this card to him. So the sender likely was not sure if the man was being held in that camp.  Since the man has been missing for 3 years in 1921, that means he was taken prisoner in 1918, during War of Independence, when serving in Estonian forces (or was he a communist and fought on Russian side?). Very interesting piece of history, not many postal items related to POWs of War of Independence. 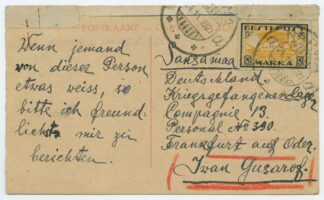