The “Tag Der Briefmarke / Dorpat” postmark was not actually used in Dorpat/Tartu, but in Germany. Here the cover has been postmarked on January 11 in Germany and then sent here and posted in Dorpat on January 19 through Dienstpost with provisional registration label (arrival Berlin 24.01.42). So this cover has actually passed thought postal system and sent from Dorpat, which can’t be said for majority of other “Tag Der Briefmarke / Dorpat” covers, which are just CTO cancellations. 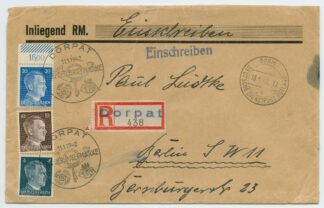