Well traveled cover. Initially sent from Kiviloo 1.10.43 to Tallinn. No stamp was attached thus postage due “18” rpf written on cover and likely also Estonian “T” mark added (both later erased). In Tallinn red “Nachgebühr” stamp (scarce) was added (later cancelled). On back there is not “Refuses due to postage due”, and on front “Tagasi Kiviloo” (return) thus the letter was returned to Kiviloo. There missing stamps were added on 11.10.43, postage due marks were cancelled, and the letter was re-sent to Tallinn tax office again. 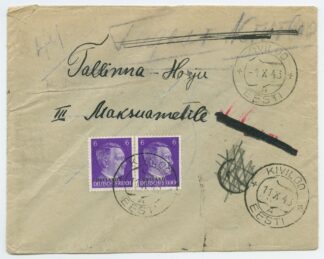